With Parliament’s Gender Quota bill passing it’s third reading, it’s only a President’s signature away from becoming law. Whether the mechanism has the desired effect or not can only be assessed in the future following a few Parliamentary cycles.

What we can do is play around with data and entertain what some previous Parliaments might have of looked like had these rules already been in place. This sort of backtesting is quite common in some domains, so adopting it to policy decisions shouldn’t be that much of a leap.

How does the Gender Quota Bill work?

The best explainer I could find on how the reform will work is from this public consultation document dated from March 2019. I’m not sure if the final version passed in Parliament is exactly identical.

In any case, the gist is in pages 41 to 47, where the process is proposed as:

Like in other projects, we’ll use the Malta Elections dataset originally started by Professor John C. Lane and currently hosted by the University of Malta. The data here spans from 1921 to 2013, allowing us to simulate all but the last legislature.

Step 1: Find in which Legislatures the Mechanism is applicable

For a legislature to be applicable it needs to have a gender imbalance of 60% and consist of only two parties. We can calculate those as follows:

The first condition always has been true for every General Election so far. Since women’s suffrage was only established in time for 1947 election, and before that no women contested, 6 legislatures spanning 1921-1945 are out.

Slightly more involved is how to calculate the additional seats, which I’ve implemented in a function below following the maths from page 43 of the document.

The document also has two fictional scenarios with which we can test our function.

Now we need to parse out how many men and women were elected or seated in casual elections throughout the legislatures, and then apply our function, accounting for the fact that if the maximum number of additional seats is limited to 12.

Now we need a fair way to fill those 12 seats. I did struggle to understand all the gist of the documentation here, but my understanding is the safest bets are “hanging” candidates of the minority gender.

It’s actually pretty trivial to calculated the “wasted” votes from our dataset, we just need to find candidates whose maximum count was equivalent to their last count like this:

From here I thought it was fairly straightforward: find these candidates, filter for the ones that are women and we’d have most of the list. But it turns out that only three of those candidates with wasted votes are women.

Which is probably why the document mentions that vote transferring mechanism. But given the document doesn’t delve too deeply into the details here and reverse engineering transfers might be too bold of an undertaking for a weekend project, the below is a rough approximation using the highest votes a candidate saw (i.e. the TOPS variable).

For the 1st elected candidate in a district, this will be the first count, for the 2nd elected the second and so on. Since by default the candidates we’re looking into were not elected, higher TOPS counts indicate a higher preference to transfer votes to that candidate.

We can pipe this into an interactive HTML table using the DT package: 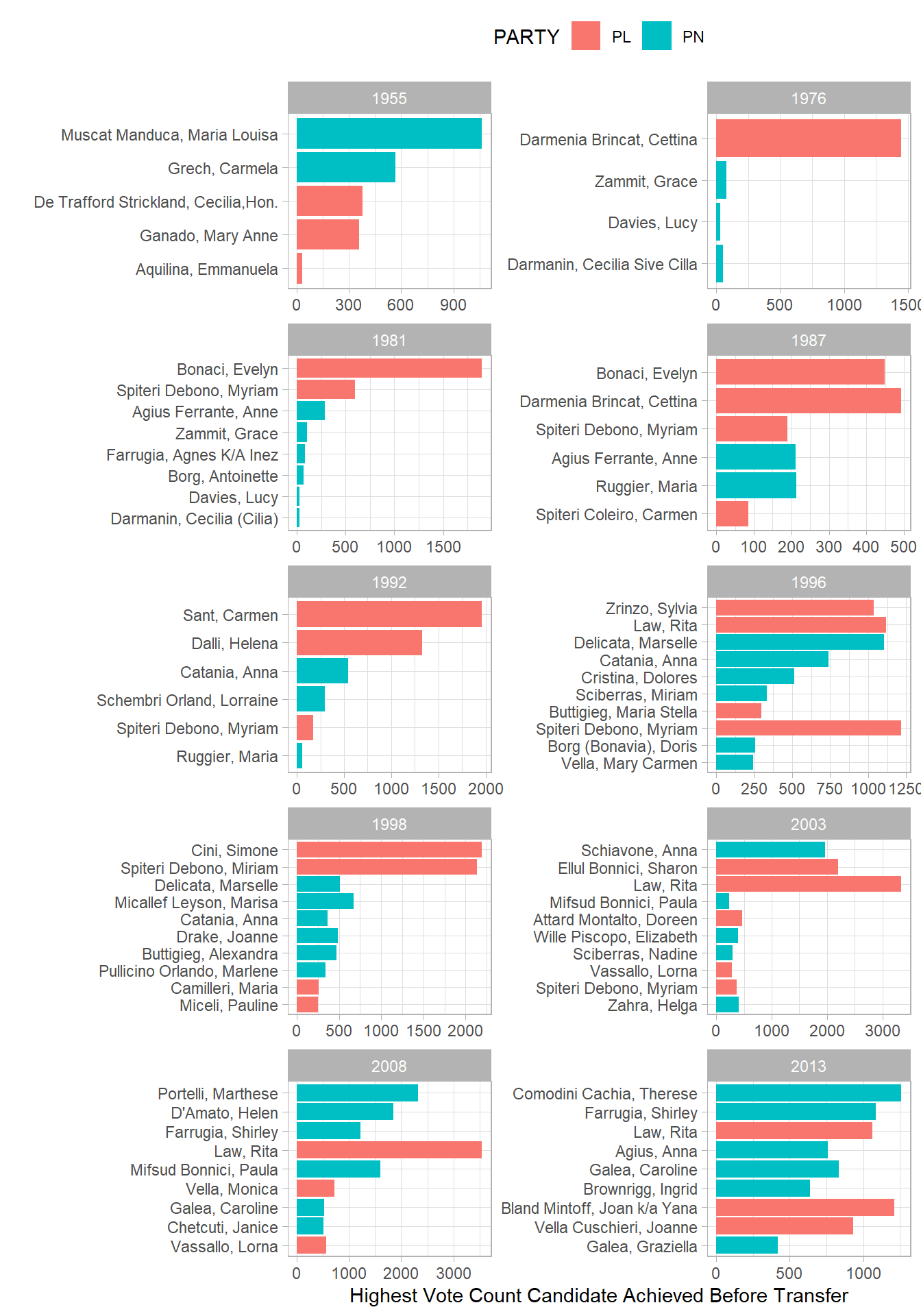 We stumble into two areas of added complexity here:

Interestingly, a number of politicians that would have of made it to Parliament are those that did eventually make it in future years: Therese Comodini Cachia in 2013 (elected in 2017), Paula Mifsud Bonnici and Marthese Portelli in 2008 (both elected in 2013), Marlene Farrugia in 1998 and Helena Dalli in 1992 (subsequently elected in 1996).

Another noteworthy instance is in the case of Rita Law, where the mechanism would mean that someone who made it to Parliament in 1998 but subsequently did not despite relatively solid performances would have of returned to the MP benches.

As an aside, one of the 1955 candidates that would have of made it is Cecilia Strickland, sister of Mabel and daughter of Gerald, who eventually left Malta and settled in Surrey.