We got a look at candidates’s spend during the 2022 election this week. ToM even gave readers the option to download the raw data, which we can use for a deeper look into the issue, especially if we join with election day data (look at the appendix at the bottom for more info on this).

What’s the range of Campaign Spending? 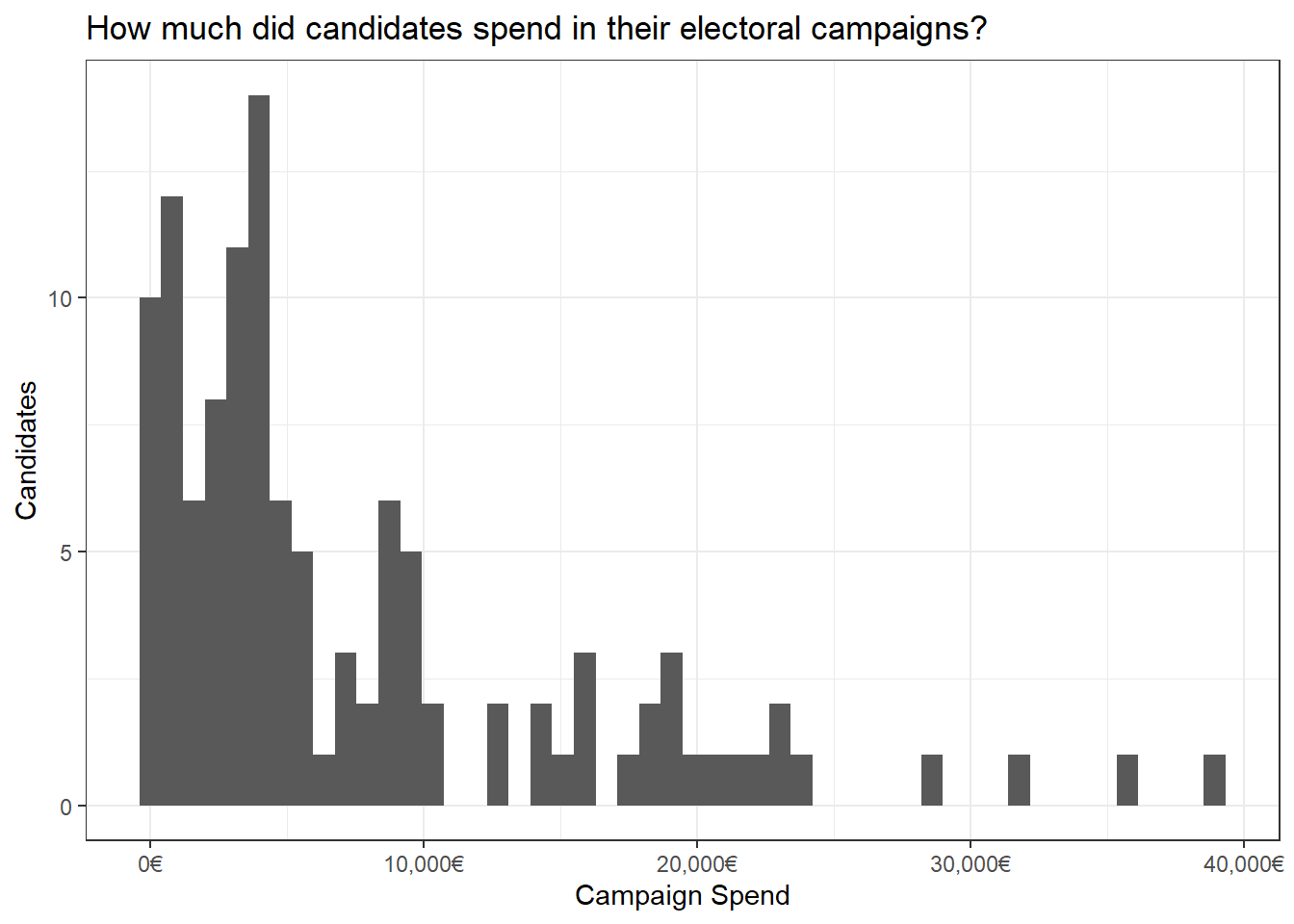 The average PL candidate spent more than the average PN candidate (p.s. see this post by Cédric Scherer on how to create these cool rainbow plots): 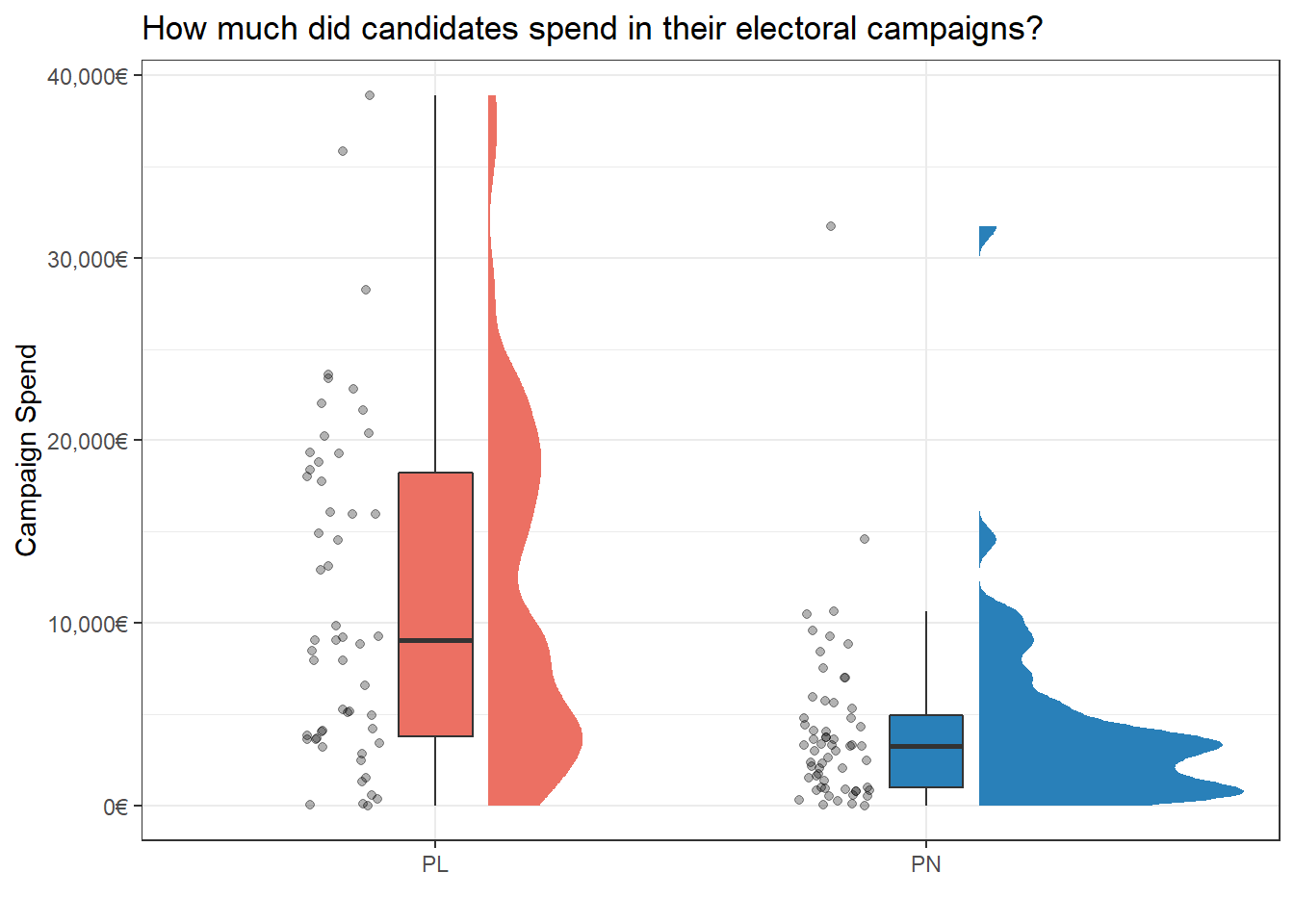 As did incumbent candidates. However this effect is much more pronounced for PL candidates than PN ones: 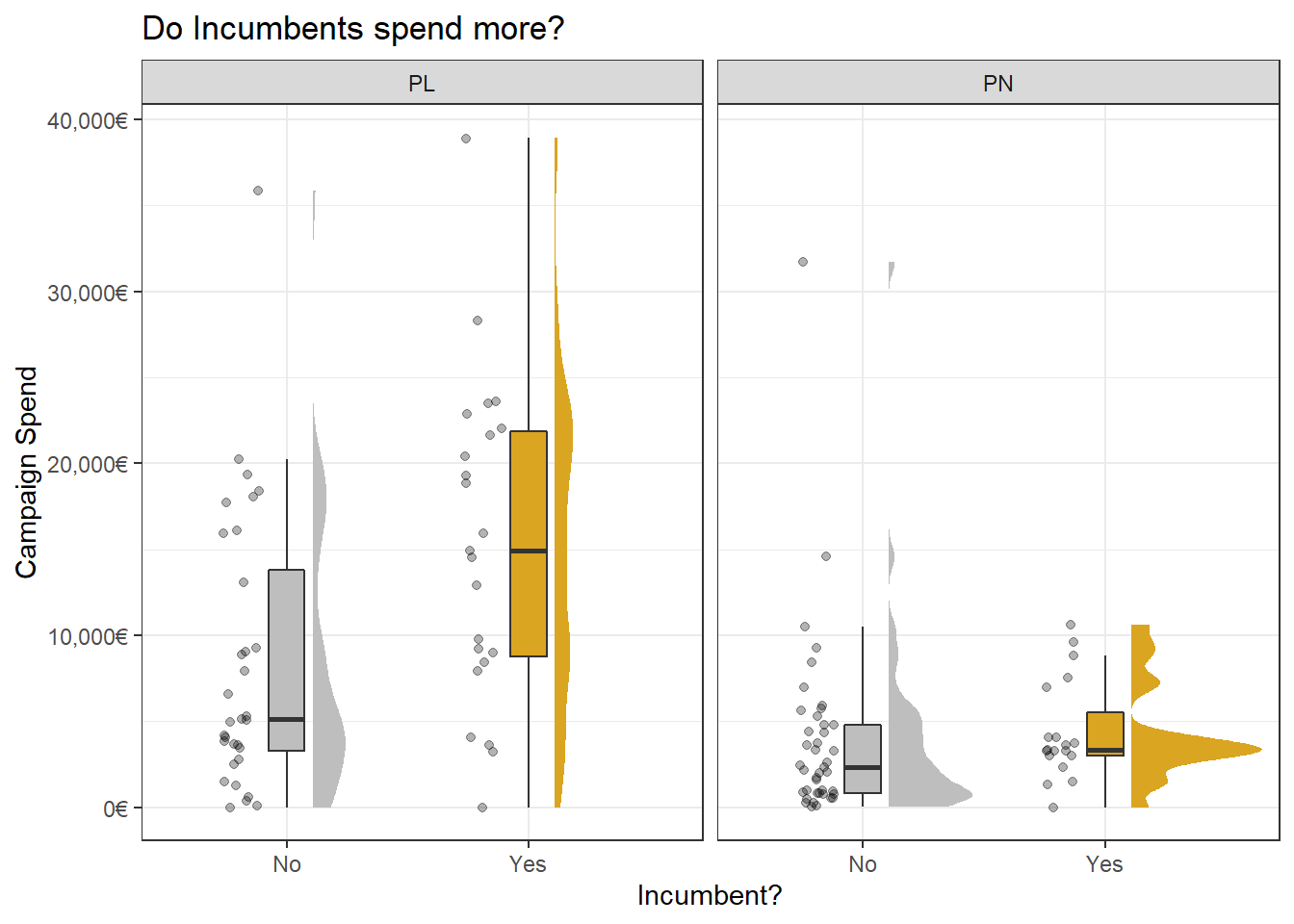 Do more expensive campaigns help you get elected more?

Perhaps the most important question to ask is if spending more means you get elected more. Although it seems so at first, reality might be more complicated. For example, we know incumbency is a powerful factor in getting elected, with politicians who were elected once before having an easier time making it again. 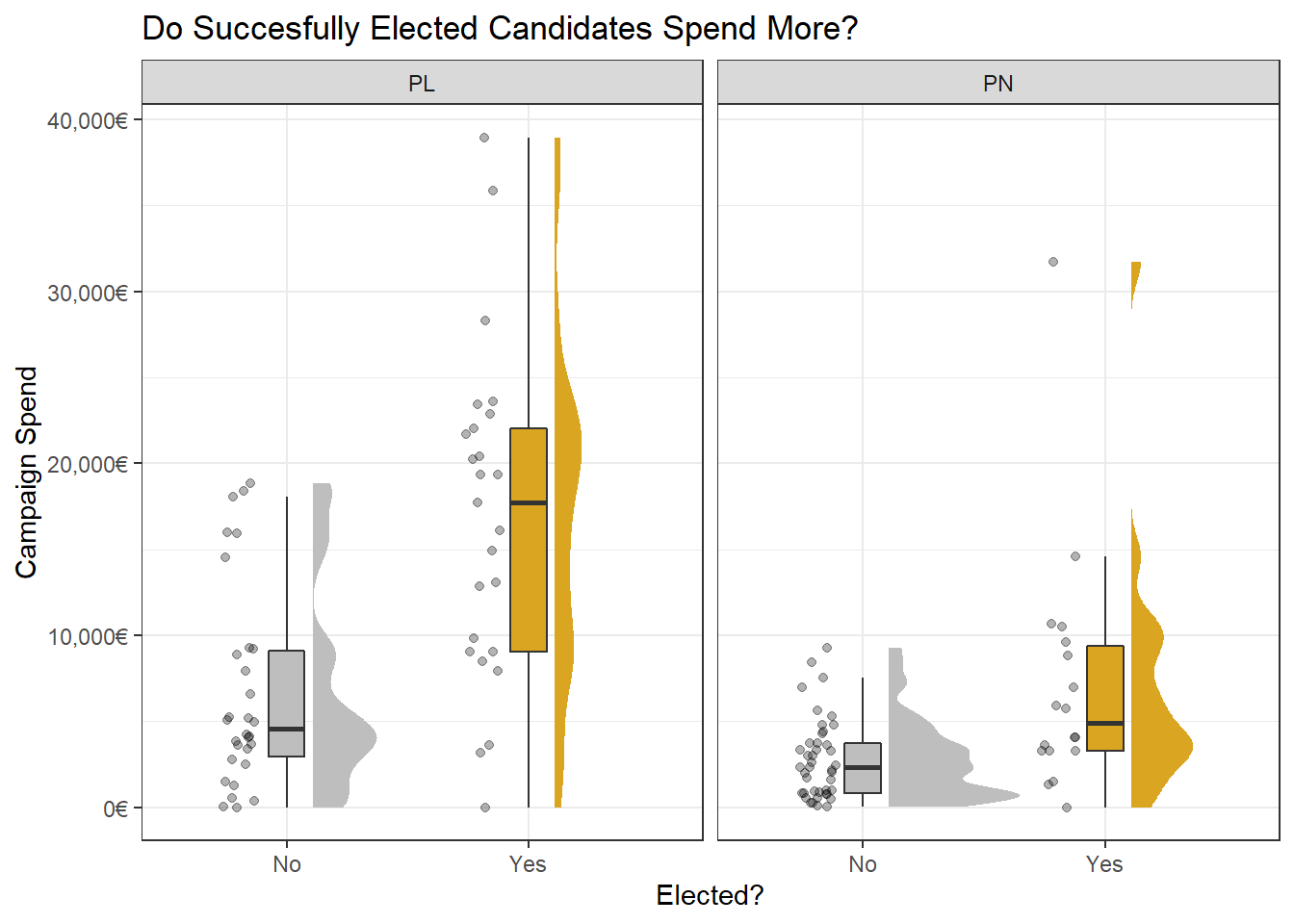 Some might argue that because of this, incumbents also have an easier time raising funds. The way to check for this is to split by incumbency. And the effect still stands, although it’s more pronounced with fresh non-incumbent candidates. 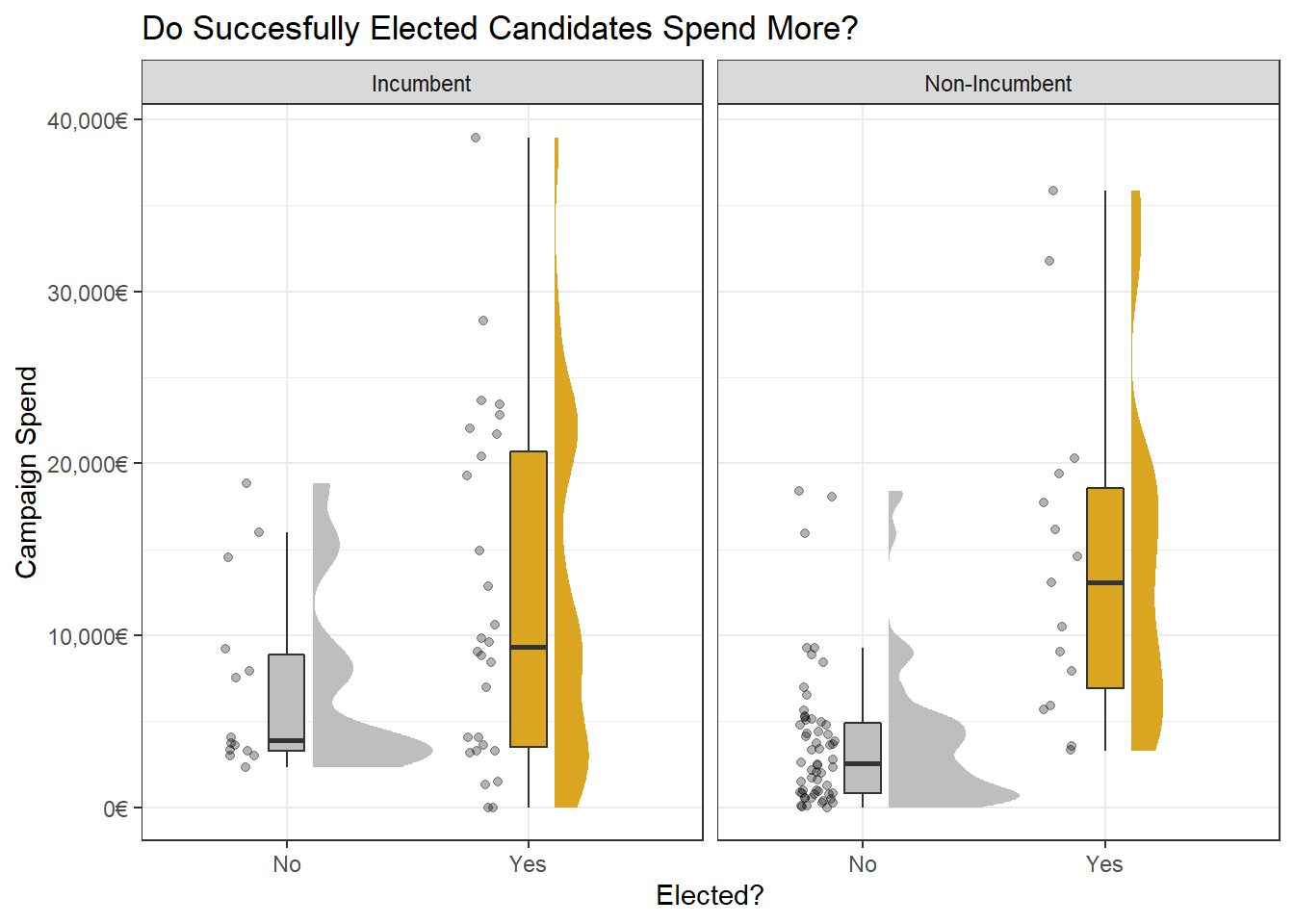 We can also plot the relationship between votes and spend. The most meaningful ones would be 1st count votes and last count, so let’s look at both.

The two high points at 0 euros of spend are Robert Abela and Bernard Grech, who customarily for leaders don’t have personal campaigns but piggyback on the party one. There does appear to be a weak relationship. The candidates that spent the least almost never got the most votes. And on the flipside those that spent the most didn’t get an enormous number of votes either, which points to a sweet spot of spend, beyond which returns are diminishing. 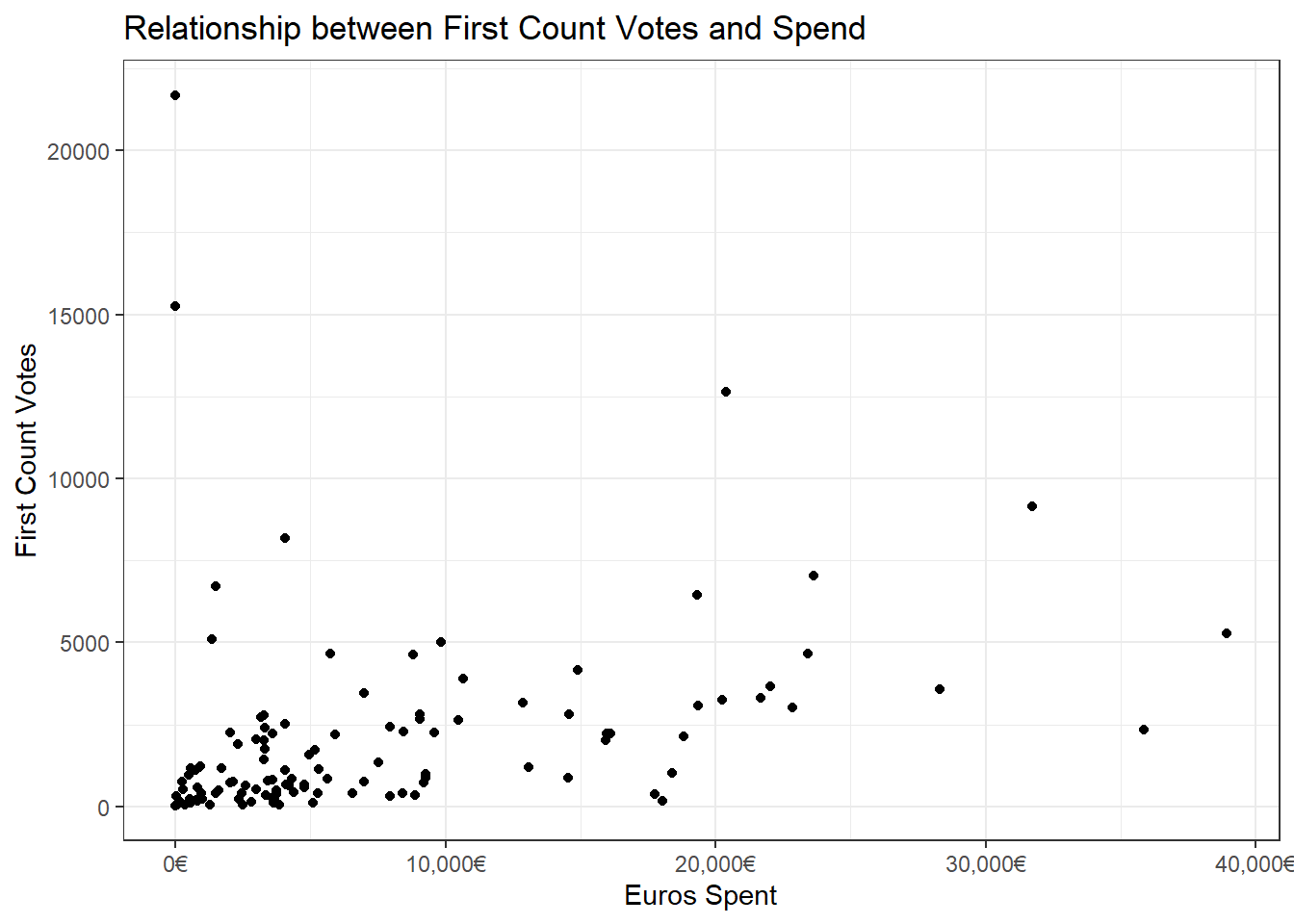 If we go for last count and filter out the two party leaders, we end up with something like this. Again, it’s weak but not exactly random. 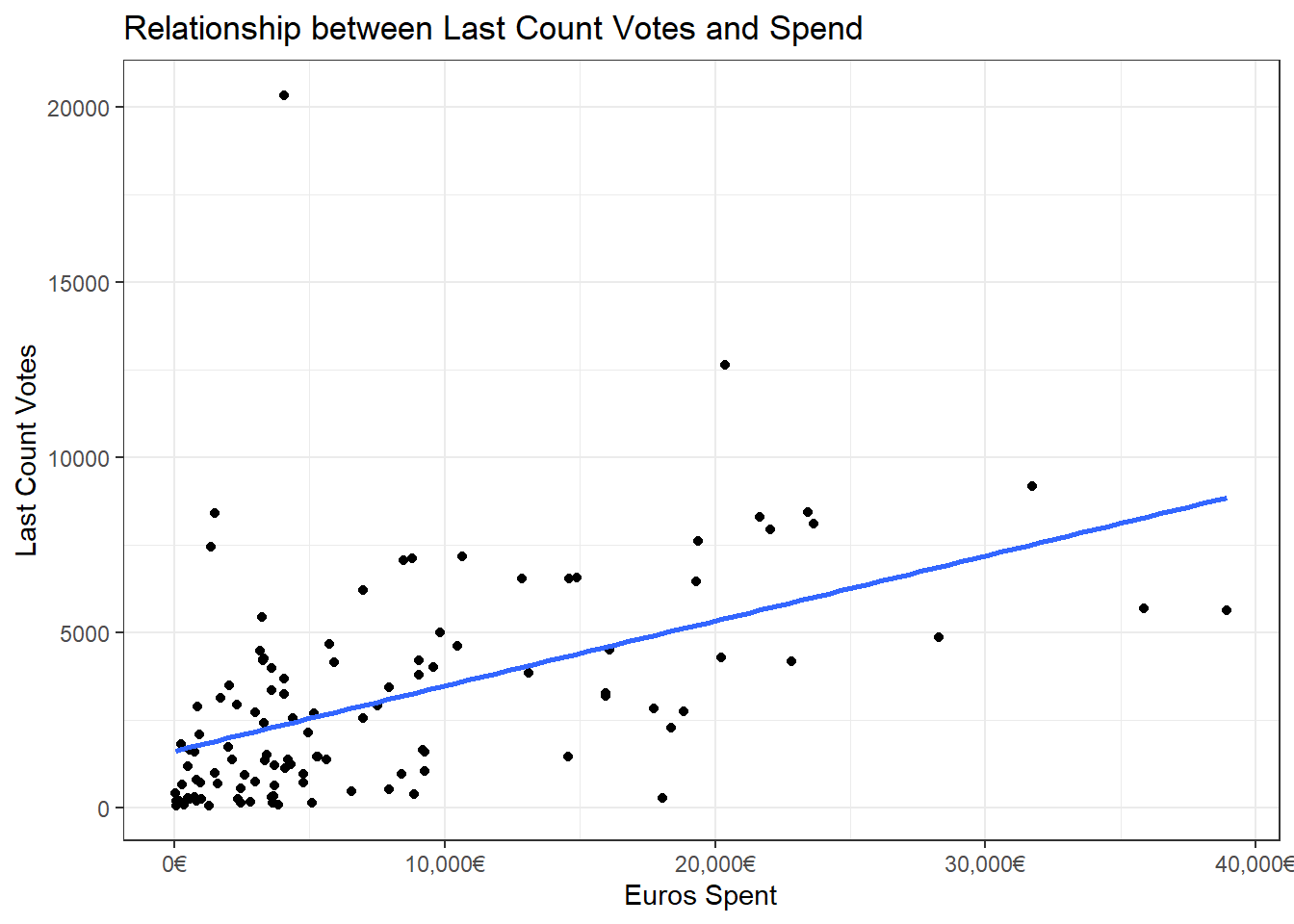 Or in more statistical terms, each additional euro spent adds 0.1 of a vote:

Which Candidate got the most bang for their buck?

We can also come up with a ratio of which candidates got the most bang for their buck by calculating the ratio of votes to money spent: 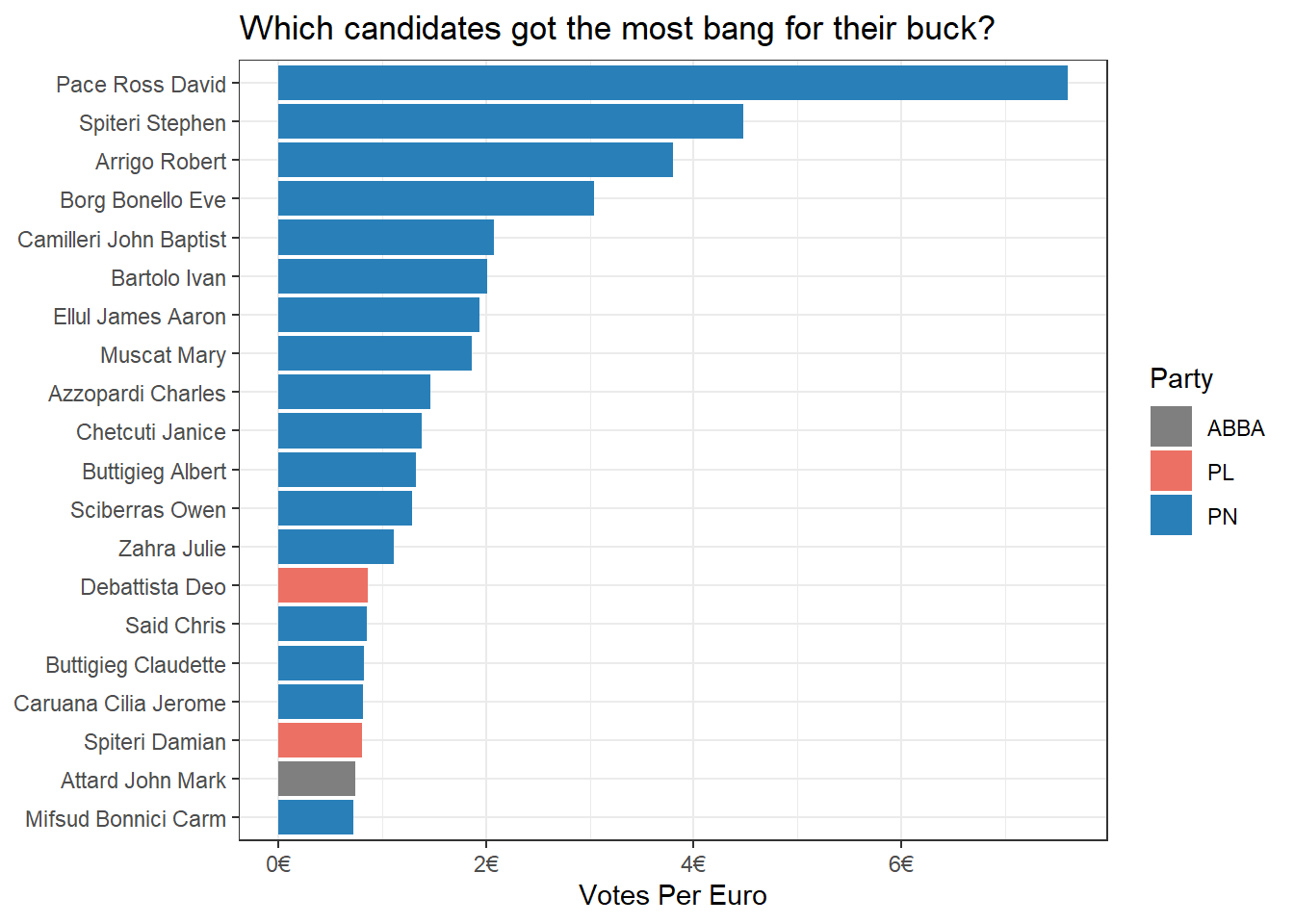 Lastly we can check how close to expectations the declarations were. In 1938 Frank Benford noted that the leading digits of a range of numbers spanning a few orders of magnitude are distributed in a very characteristic way like this, with 1 being the leading digit 30% of the time and all other digits declining as a function of their rank.

The most intuitive explanation of why this happens is from this numberphile video, which explains that an 80 or a 90 needs only a tiny push to become a 100, but a 100 needs a relatively large push to become a 200 or 300.

Benford’s law is used to catch all sorts of cooked numbers because humans often exhibit the inverse pattern when fudging, that is, rounding 1,020 down to say 950.

So how do the observed frequencies of campaign spend stack up? There are less 1s and more 9s than you’d expect, but nothing conclusive stands out, especially considering that the observations are on the small side, and that the 40,000 euro limit might have of swayed some things. 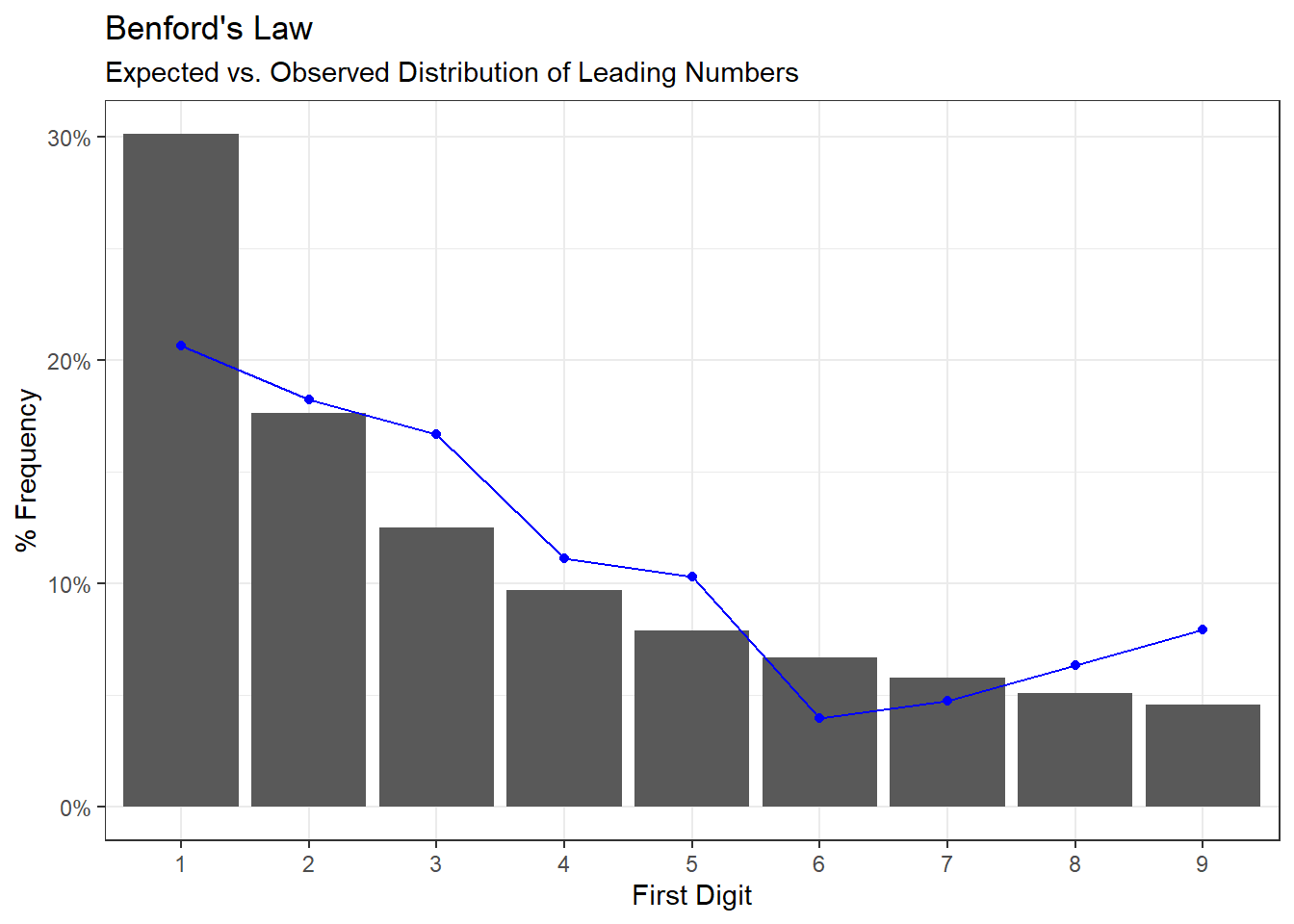 We can hack a fast join together using the stringdist and fuzzyjoin packages because the cosine distance between the two names will be similar:

To know whether to join or not, fuzzyjoin needs a Boolean flag, so we can create a wrapper function like so, on a moderately conservative value:

How well did it do?